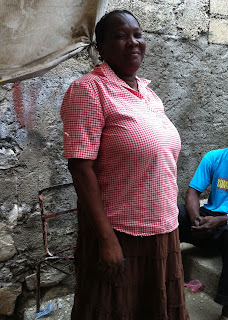 Rosaline lived close to the clinic at the bottom of the grand new stairs that President Martelly built to connect a densely populated area of housing and Petionville. She dropped into the clinic from time to time to check her blood pressure, always accompanied by her great big smile and friendly chatter. On Thursday, much to Andrew's dismay, Donna and I decided to go exploring the new stairs and their surrounds. We bumbed into Rosaline who escorted us on the stairs. She took my hand to guide me. She showed us her home and her children. The stairs was Rosaline's pride and joy. Back at the clinic Rosaline's blood pressure was sky high. We informed her of the dangers and inquired about her blood pressure medications. These were all gone so we informed her of a clinic that would provide free medications. Donna gave her a bracelet to remind her to get some hypertensives and to take them regularly. Rosaline sang with us before returning home. 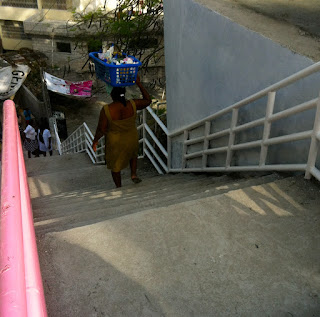 Efforts continued to complete the stairs and to decorate the street for the Presidents official opening on Monday. All of the walls were painted in pink, the president's colour and a mural was painted in his honor. 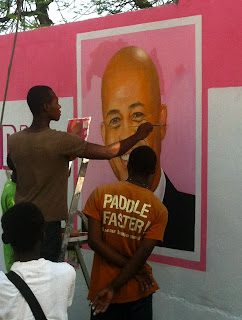 On Monday, as we were waiting for the president to come and inaugurate the stairs, one of Rosaline's daughters came up to the clinic screaming. We ran down to find Rosaline collapsed in a dirty brick alley which connects her house to the stairs. On instinct, I promptly go about my ABCs, she was breathing, barely responsive, massively tachycardic and had a blood pressure of 220/180.

I momentarily took control of the situation and asked Andrew to find out who had called the ambulance or doctor and when would they be here. I got really frustrated because I couldn't get a straight answer from anyone. Apparantly they didn't want a doctor or ambulance, they didn't want to move her. They wanted to let her get up by herself, they shooed me away and started pouring water over her and placing leaves on her feet and around her body.

I was so confused. It appeared that nobody was making any effort to get her any help, or to bring her to hospital. At first I thought it was because they couldn't afford help. But soon I realised that they believed that if you touch someone when they are down that you'll make them paralysed on one side. I did my best to convince them that she is probably already paralysed on one side and is desperately in need of urgent medical attention.

I had both Caroline and Andrew translate my opinion to the family and what the best course of action was. My efforts to get her help were futile.

I had to respect the wishes of the family and walk away leaving a poor soul lying in a dirty puddle on the ground. I unknowingly had disrespecting their culture. I left with on old lady scorning me (I was a bit worried when I missed my flight in Miami!). If she survives, and is hemiplegic, they will think that I caused it.

I knew that it was a big bad world down in Haiti, this just drilled it home. If only primary health care was more accessible. Perhaps it is better that she didn't get help.

It is unlikely that Rosaline will ever climb her stairs again.
Posted by Global Therapy Group at 12:11 PM